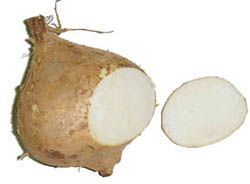 Jícama (pronounced /ˈhɪkəmə/, Spanish pronunciation: [ˈxikama], from Nahuatl xicamatl, [ʃiˈkamatɬ]), also Yam and Mexican Turnip, is the name of a native Mexican vine, although the name most commonly refers to the plant’s edible tuberous root. Jicama is one species in the genus Pachyrhizus that is commonly called yam bean, although the “yam bean” sometimes is another name for Jicama. The other, major species of yam beans are also indigenous within the Americas. It very much tastes like a sweet pea pod.br>

The jicama vine can reach a height of 4-5 metres given suitable support. Its root can attain lengths of up to 2 m and weigh up to 20 kilograms. The root’s exterior is yellow and papery, while its inside is creamy white with a crisp texture that resembles raw potato or pear. The flavor is sweet and starchy, reminiscent of some apples or raw green beans, and it is usually eaten raw, sometimes with salt, lemon, or lime juice and chili powder. It is also cooked in soups and stir-fried dishes. It can also be cut into thin wedges and dipped in salsa as a healthier alternative to corn chips.br>

Due to its growing popularity, cultivation of jícama has recently spread from Mexico to other parts of Central America, China and Southeast Asia where notable uses of raw jícama include popiah and salads such as yusheng and rojak. Jícama has become popular in Vietnamese food, where it is called cây củ đậu (in northern Vietnam) or củ sắn or sắn nước (in southern Vietnam). It is known as by its Chinese name bang kuan to the ethnic Chinese in Southeast Asia. In Mandarin Chinese, it’s known as dòushǔ(豆薯).br>

In Mexico, it is very popular in salads, fresh fruit combos, fruit bars, soups, and other cooked dishes.br>

In contrast to the root, the remainder of the jícama plant is very poisonous; the seeds contain the toxin rotenone, which is used to poison insects and fish.br>

Jícama is high in carbohydrates in the form of dietary fiber. It is composed of 86-90% water; it contains only trace amounts of protein and lipids. Its sweet flavour comes from the oligofructose inulin (also called fructo-oligosaccharide).br>

Jícama should be stored dry, between 12°C and 16°C (53°F and 60°F); colder temperatures will damage the root. A fresh root stored at an appropriate temperature will keep for a month or two.br>

In the Philippines, Jicama is known locally as singkamas.br>

In Indonesia, Jicama is known as bengkuang. This root crop is only known by people in Sumatra and Java. Mostly they eat it at fresh fruit bars or mix it in the rujak (a kind of fruit salad). Padang city in West Sumatra is called “the city of bengkuang”. Local people might have thought that this jicama is the “indigenous crop” of Padang. The crop has been grown everywhere in this city and it has become a part of their culture.br>